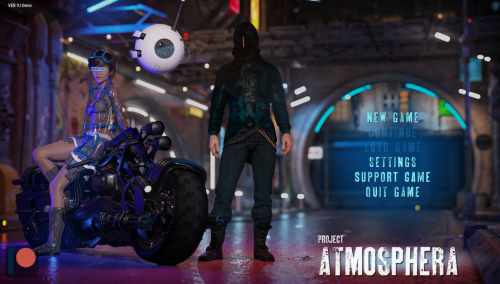 The action of the game takes place in the near future. The year 2025. The main character Dan – a young man who just recently graduated from the university majoring in “Organic Robotics and Artificial Intelligence”.

It would seem a great profession, but our hero can not decide what to do next. Continue to sit on his mother’s neck or take it all in his own hands and finally become a man. I’m sure you can help him make up his mind! He is surrounded by different people, among them there are close friends, and some even closer than he thought.
There are just acquaintances, there are enemies. Sudden incident will make our hero wake up from “hibernation” and become a real man, who is ready to do anything to achieve his goal. Our hero has everything he needs to do. Intelligence, charisma and of course a great tool in his pants, which more than once will help him “open the locked doors”. But I’m in a hurry to upset you, in our game you shouldn’t shove your dick everywhere where it is offered – it can end very badly.

Features of the game:
2 game modes. Story and free.
Interface, Locations, NPS sprites in the resolution 2560×1440.
H images of 1920×1080 scenes (an add-on package will be released later, which will replace all the graphics in the game by 2K.
Independent of the main plot NPS lines
NPS has its own characteristics such as energy, satiety, sexual arousal, even types of temperament and personal favorites in sex. They influence the progress of events and relationships with the main character.
The main character has the basic characteristics
As the game progresses, your character will receive unique perks. Which will help you finish the game with dignity.
Some locations are sounded.
Continue reading