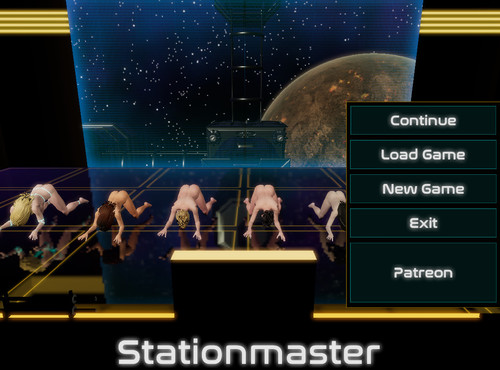 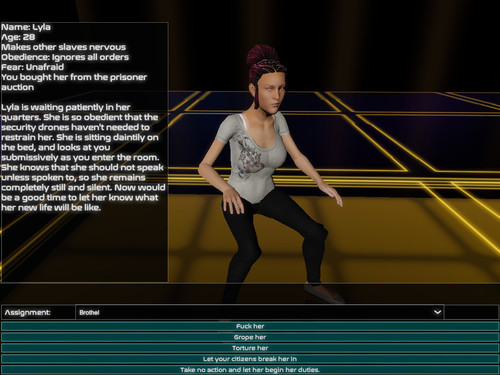 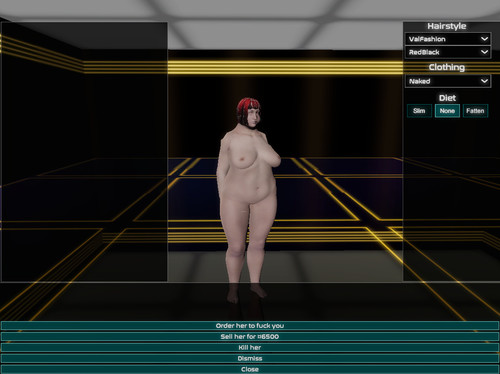 Description:
This is a game about slavery and war in an age without rules of engagement. As a player, you will have the option to commit several crimes against humanity. If that’s not your cup of tea (sexually or otherwise), I respect your moral luck, but you will likely find everything about this game horrifying. That said, all characters are over 18, and I don’t think anyone should do anything described in this game in real life (except maybe for sitting at a desk all the time, but even that’s not good for your back).

What is Stationmaster?
Stationmaster is a base-building game with a 4X space strategy component and a heavy focus on sexual slavery. You are the owner of a space station, and build it from a small-time floating brothel to the center of a galactic empire.​

Change-Log: V0.16
New Furniture:
Racetrack (in the arena)
Yoga Mat (in the spa)

I cut some planned content from this patch, and needed something to fill the time, so I spent some time reworking the interface of the galaxy map.

I completely replaced the camera controller, and it’s much less shitty now. I’ve also removed the barrier between the “galaxy view” and the “star view,” so you can just zoom into a star to see its planets.

Cut Content:
I’ve been noticing that the slave inspection interface is getting a little crowded, particularly the assignments list. Adding this much stuff would make it a lot worse, so I removed some of the planned features to address it.
Attendant Desk: This was mildly interesting, but I didn’t see enough reason for it to exist. The Head Girl (particularly with the domination fetish) does the same thing, and I’m trying to avoid too many redundant roles.
Weightlifting Arena: Try as I might, I couldn’t make this interesting. I did increase damage from strong slaves in the arena and make them more valuable though, so training strength is still useful.
Interaction Simulator: Instead of doing this, I set it up so you can build multiple receptionist desks, and they now train charisma in addition to building appeal.
Option to ossify slaves from the inspection screen: I cut this because it was cluttering up the interface too much for something that isn’t likely to be interesting to most people. It’s still available as a random event though.

New Stats:
Slaves now have strength, intelligence, speed, sexual skill, and distinct fetishes. Each one has effects on other systems in the game, along with an event or two for different values.
Fetishes build obedience when the slave is given an assignment. Slaves will also sometimes request assignments that are more in line with their fetishes.
Speed increases movement speed in the arena (and will dictate success on the racetrack)
Strength increases damage done in the arena (and will determine success in the weightlifting competition). I’ve also removed the “muscle” slider in the surgery center, and set it up so steroids only build strength if combined with training.
Intelligence dictates how quickly the slave learns

New Tags:
Devoted, Mindbroken, Blind, and others
All in all, there are about 10-15 new tags for slaves. Devoted and Mindbroken have the most sweeping changes (with new events and text in several systems), but several others, such as “Friends,” “Blind,” and “Albino” have effects as well.
There are around a hundred subtle effects from these, ranging from training adjustments to whether they look at you during cutscenes.

H Panel Improvements:
Slaves now have dialog during H scenes depending on their obedience, fear, and other traits. Mindbroken, corrupted, and devoted slaves have unique dialog.
Several bugfixes around animation

Nicknames:
Slaves can now earn nicknames outside of random events. There are around a hundred to choose from, split among many different conditions.

New Implants:
The Groundhog Implant resets slaves’ memory at the end of each day, freezing their obedience and fear.
The Blindness Implant, Lobotomization implant, and Insomnia Implant are relatively self-explanatory.

Misc Changes:
Corrupted slaves are now 30% creepier
Added glowing skin back to dolls
Fixed an issue where animation offsets weren’t properly triggering until a second after the character started using a piece of furniture.